The Beacon Hill Park heron colony was abandoned in May, 2007. They did not return in 2008. This article describes life in the colony in its heyday, before relentless attacks by three Bald eagles led to the abandonment of seventy-one nests. A full report on the 2007 calamity begins Chapter 22 of the Beacon Hill Park History.

Heron colonies are usually located in isolated sites far from the noise and activities of humans and their machines. The Park colony nest trees are within easy walking distance of downtown Victoria. They stand a few feet east of Douglas Street, a busy city thoroughfare.

The large, slow-moving herons are easily seen without binoculars. During their six months presence in the Park each year--February to August--visitors can observe a wide range of heron behaviours, including courtship displays, nest building, mating, and the feeding of demanding, noisy young birds. Bald Eagles regularly attack the nests with dramatic results.

In the photo above, two Great Blue Herons construct a nest high in a Douglas fir in Beacon Hill Park. Most twigs are collected one at a time from nearby trees and brought to the site by males. Females place them in position on the nest. Impossibly long branches are often delivered and countless sticks fall to the ground. The finished nests are loose, messy piles of sticks. (This outstanding photo by Darren Stone was published March 23, 2004 in the Times Colonist and is included with permission.) 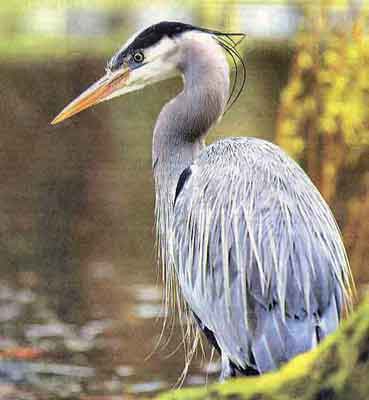 Adult herons are identified by features seen in the photo on the right: long body plumes, white crowns bordered with black, and black shoulder patches. Male and female herons look identical, though a few experts can distinguish males by their slightly larger bill size. 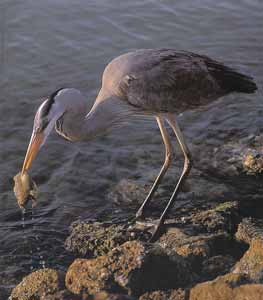 Long-legged herons spend most of their hunting time wading or standing motionless in shallow water waiting for small fish or other marine life to come within striking range. The distinctive S shape in the heron’s long, slender neck can uncoil with incredible speed to catch prey. Herons grasp nearly all fish between their serrated mandibles; it is rare to see them speared, as in the photo on the left.

In addition to fish, herons consume almost any available live prey, including voles, frogs and chicks. If a heron has enough flying room, it can scoop a duckling off the surface of the water in mid-flight, as in the photo on the right.

Great Blue Herons arrive in Beacon Hill Park the end of January and early February to begin the search for mates. Herons select new mates each year. The decision is crucial because the pair must work together for more than three months to successfully rear their young. The photo on the left, taken by N. Ringuette in February, 2004, shows herons grouped in one of two favorite “meeting” trees located on Goodacre Lake a few feet north of the nest trees.

Courtship involves both sexes displaying their long neck, chest and back plumes, actions with extended wings and feathers and special sounds. Bills turn bright yellow-orange during the breeding period and fade after eggs are laid.

In 2004, ninety-six mated pairs constructed apartment-style nests on branches in more than seventeen shared trees near the Douglas Street crosswalk at Avalon Way. Most of the trees used were Douglas firs. New nests were constructed or refurbished as close to the treetops as possible; nest heights varied from about 45 to 70 feet.

Patient observers can see herons mating on nests they have constructed, as shown in the photo on the right.

Following the action of courtship, nest building and mating is a quiet period of 14 to 35 days when clutches of three to five chicken-size eggs are incubated in shifts by both parents. The adults lie low in the nests and are sometimes difficult to see, but according to one study, they are present about 90% of the time.

Adults throw empty egg shells out of the nests when the chicks have worked themselves free. A fresh bluish shell on the ground is evidence a chick has hatched. Anyone finding a shell can assume the egg was laid 27 days before and that egg formation began ten days prior to laying. Park visitors walking under nest trees to examine discarded egg shells might want to wear hats. Feces is directed out of the nest and down the tree, splattering leaves, branches, the ground and the unwary. In fact, one of the best ways to locate nest trees is to look down, not up: white feces is a reliable marker of heron residence. 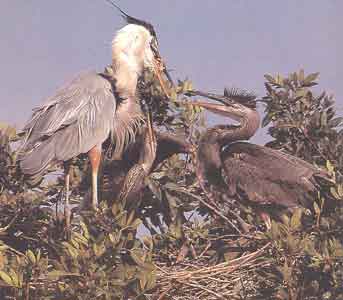 The action, noise and pungent smell in the colony increase noticeably during the long period when parents are feeding their demanding, growing young. For sixty days, parents fly day and night in all four directions from the Park colony to ocean shores including the Esquimalt Lagoon, Oak Bay, Dallas Road and the Inner Harbour.

According to researcher Robert Butler, most small fish caught by herons during this period are gunnels, sculpins and shiner perch. Prey is most abundant in summer and the best tides for fishing occur in May and June, when 7/10 of low tides occur in daylight. If the adults nested early enough, this abundance coincides with the extra demand of feeding growing chicks.

When chicks are small, parents regurgitate partially digested fish into the nest; later they regurgitate directly down their throats. At four weeks, chicks are large enough to lift and swallow whole fish dropped into the bottom of the nest. The photo on the left shows a returning parent met by two large chicks lunging at its bill. The young pull the parent’s head into the nest where it drops food before flying back to the fishing grounds. After 60 days of non-stop feeding, the chicks weight has increased from 50 grams--the weight of l/3 of a medium apple--to a full adult weight of 2,400 grams (over five pounds). When they finally attempt flight, it is likely the young outweigh their hard-working parents 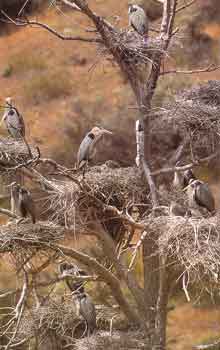 If five eggs hatch, it is likely three or more chicks will die. Some chicks die from exposure if the weather is poor; some are attacked by siblings. A sizeable number of chicks are eaten by Bald Eagles. Adult herons respond to Bald Eagle attacks with thunderous cries of alarm and mass flights. Though impressive to human observers, these displays are completely ignored by eagles; the predators swoop low over the nests, grab heron chicks with their talons and land on nearby Park trees to dismember and consume them. Heron feathers falling like snow indicate to observers where the eagle is perched.

A large number of young herons fall to their deaths. Flimsy nests in constantly moving tall treetops--already dangerous places to live--become increasingly crowded as chicks grow. Young birds perched on wobbly branches outside the nest can lose their balance. Siblings rush to meet returning parents, jostling each other in the process. Gusts of wind catch flapping chicks by surprise. Park gardener Margaret Marsden collected 30 dead heron chicks from under nest trees in 2002, when there were 90 active nests.

Dead chicks on the ground present Park visitors with rare opportunities to examine young birds. One can appreciate their phenomenal growth rate when viewing the incredibly large beaks and legs of three or four week old chicks up close. 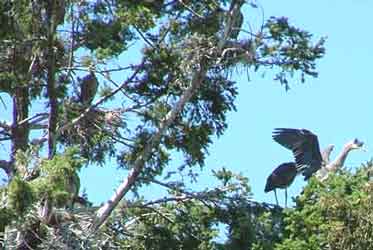 A young heron exercises its wings before daring its first short flight in this June, 2004 photo taken by Brian Hepburn. Young birds are called “fledglings” for the first few weeks after they leave their nests and “juveniles” the rest of their first year. Though the same size as adults, fledglings can be distinguished by their clumsy behaviour and remnants of down protruding from slate-gray crowns. Juveniles are distinguished by their gray heads and the absence of white and black crowns and long body plumes. During June, July and early August, fledglings and juveniles can be seen flapping awkwardly around the Park, landing on low trees and odd locations such as the baseball diamond. By the end of August and sometimes earlier, all herons have left the nest area, not to return until the following February.

Herons spend the winter scattered along the coast, searching for food. Catching enough calories every day to survive is a major challenge for young herons; it is possible 90% die during their first year. Successful hunting requires many skills, acquired only with time and practice. A heron fledging in June has a much better chance to learn how to catch fish than a heron leaving a nest in August when tides are poor and fish less abundant. Winter is the hardest time of all; by December, only 1/10 of low tides occur during daylight hours. Young herons strike at, miss and drop prey more often than adults, according to Butler, and they are unable to catch very small fish or large fish. In addition to being less skilled hunters, young herons more likely to run into electrical wires, fences and cars; they are also shot by people and killed by eagles and dogs.

Though every other heron departs by the end of summer, a semi-tame bird known as “Henry” remains in the Park year-round. Henry’s usual location at the northwest edge of Goodacre Lake is a photographer's dream. The photo on the right shows Henry posed with the picturesque historic Stone Bridge visible in the background.

Henry is one of the few heron chicks to survive falling from a nest. Most chicks either die on impact or quickly starve because heron parents do not feed chicks out of their nests. When Henry fell uninjured in the early 1990's, he was fed by nearby apartment dwellers. Now between ten and fourteen years old, he rushes to meet those who regularly bring him fish. He reportedly likes plain water sardines but rejects sardines packed in mustard or tomato sauce.

The Beacon Hill Park heron colony began with a single nest in 1982. Unnoticed by most Victorians, the number of nests increased sporadically through the 1980's and 1990's. By 2000, when 65 active nests were counted, the colony was no longer a secret shared by a few birders. In the following years, the City of Victoria promoted the colony as a spectacular feature of the Park. Heron photos appeared in city publications, a heron webpage and “heron-cam” were added to the city’s website, informational signs were posted at the colony, numbered tags were nailed to nest trees, and the parking area immediately below the nest trees was closed during nesting to reduce disturbances.